Kinsale has always been a bustling port. It was a base for Ireland’s earliest settlers, for Vikings, Anglo Normans and later served for some 300 years as an important English naval base.

It was from here that James II escaped to France after his defeat at the Battle of the Boyne. Kinsale was also a port of call, in 1703, for the Cinque Ports, which carried Alexander Selkirk on board. Selkirk went on to be marooned on a Pacific island, giving Daniel Defoe the idea for Robinson Crusoe. In 1601, Kinsale was the site of a battle in which English troops defeated Irish and Spanish opposition, resulting in the legendary ‘Flight of the Earls’, a mass exodus of Irish aristocrats to Europe. Little wonder then, that the town has six heritage trails! Amongst the highlights is the 16th-century Desmond Castle, a three-storey tower house built originally as a Custom House and used in Napoleonic times to house French prisoners of war. Today, the building houses Kinsale’s Museum of Wine. Outside the town, the trails fan out towards two dramatic forts flanking the harbour mouth. Charles Fort at Summercove is one of the finest examples of a 17th-century star-shaped fort in Europe, with 40-foot walls and several bastions cutting a dramatic dash in aerial photographs. James Fort, dating from 1602, holds the equivalent position across the harbour mouth. Another notable building in Kinsale is the courthouse, now housing the regional museum. After the Lusitania was torpedoed by a German U-boat in 1915, an inquest was held in this building, with Captain Turner giving evidence before a jury of shopkeepers and fishermen. Today, of course, Kinsale is one of Ireland’s top tourist hubs. Visitors come from all over to enjoy its yacht-speckled harbour, Georgian and Victorian architecture and some of the best seafood restaurants in the south. Kinsale is as much a place, they say, as a state of mind. WALK SECTIONS Follow the 5 walks or Slí on the accompanying map with points of interest explained.

1. St. Multose Church Built in 1190, this church has remained in continuous use to the present day. Some interesting features include an inscription in Norman French, the Easter sepulchre, the Baptismal font, the carved memorials, and the reredos from the Galway chapel as well as the wooden Coat of Arms. The Southwell Memorial in Carrera marble, is the work of Arnold Quellin of London. It was in this church that Prince Rupert proclaimed Charles II as King, after hearing the news that Cromwell had had King Charles I executed in London. Prince Rupert’s fleet was at anchor in Kinsale harbour at the time. 2. Carmelite Cemetary 3. Carmelite Friary Carmelites are associated with Kinsale since the early 14th century. Today the Friary Church of Our Lady of Mount Carmel is a place of worship, prayer and tranquillity. 4. Desmond Castle & the International Museum of Wine Built as an urban tower house by the Earl of Desmond c. 1500, Desmond Castle has served as Customs House, Prison, Ordnance store and a Workhouse. The Museum details the history of the Wine Geese; the intriguing story of Ireland’s wine links with Europe and the wider world. This is an essential half-hour all-weather activity. (Photo: John Collins.) Desmond Castle was built in about 1500 by Maurice Bacach Fitzgerald, Earl of Desmond. It has had many uses. In 1600 and 1601 it was used as an arsenal by Don Juan Aguilla during the Spanish occupation of the town which lasted for 100 days prior to the Battle of Kinsale in 1601. Kinsale was a designated Wine Port, and a supplier of ships for the Vintage Fleet as far back as 1412. In that year, the Vintage Fleet of some 160 vessels plying to and fro from Bordeaux included five Irish vessels, three of which were from Kinsale, and two from Dublin. More information on the wine trade can be found at www.winegeese.ie. Desmond Castle was also used as a customs house. In the 17th century the castle became popularly known as the “French prison” and was used for prisoners of war, most of whom were captured at sea. The majority of the prisoners were French, but many nationalities were ransomed or exchanged for their British counterparts. Some prisoners were housed in nearby huts, and the conditions were grim, with overcrowding, lack of food, starvation and disease. A disastrous fire in 1747 killed 54 prisoners. During the American War of Independence, the crews of many American vessels were held prisoner in Kinsale in poor conditions. Help came from Rev. William Hazlett, a Presbyterian Minister in nearby Bandon, and from Reuben Harvey, a Quaker merchant in Cork. Through their influence conditions were improved. In 1783, George Washington thanked Harvey for “his exertions in relieving the distresses of such of our fellow citizens as were prisoners in Ireland”. The “Wild Geese” was the name given to the thousands of families who migrated from Ireland from the 17th to the 19th centuries due to religious persecution, violation of treaties and prohibitive commercial legislation. Some of them entered the wine trade and are often referred to as the “Irish Wine Geese”. Their descendants can be found in the four corners of the world. Desmond Castle was restored by the Office of Public Works and now houses the International Museum of Wine which opened in 1997. The exhibition uses a variety of media to recall the castle’s eventful history and the amazing story of the Irish links to the wine trade which stretch back to Irish mythology and continue into the present day. 5. St. John’s Parish Church 6. The Courthouse & Regional Museum This interesting building was built about 1600, with additions in 1706 that included the frontage with the loggia on the ground floor. Offices and a jury room were provided on the first floor, and part of the original building was converted into an interesting panelled courtroom. In this building the Kinsale Town Corporation and Sovereign conducted their affairs. The courthouse was also used for ceremonial occasions in the 18th century. On Monday 10th 1915, the Courthouse was used for the inquest into the loss of the liner Lusitania. Captain Turner gave evidence before a jury of twelve shopkeepers and fishermen. The Regional Museum is now housed in the Courthouse. 7. Temperance Hall 8. Methodist Church

10. Muncipal Hall 11. Alms House The Almshouses were built by Sir Robert Southwell (1635-1702). Sir Robert was born in the Kinsale area, and became one of the most famous and powerful men of his time. 1663 Elected to Parliament for the Cornish Borough of Penryn 1664 Appointed to Secretaryship of Prizes 1665 Married Elizabeth Dering. Buys one of the four Clerkships of the Privy council from Sir George Lane, Secretary to Ormond. Appointed Emissary to Portugal. Knighted later in the year. 1671 Sent to Brussels as Ambassador. Appointed Commissioner for the Excise 1672 Secretary to the Commission of Prizes, having previously relinquished the post in 1667. Acquired property in Spring Gardens, Westminster, and Kings Weston near Bristol. 1677 Succeeded to Vice-admiralty on the death of his father. 1680 Chosen for the embassy to the Elector of Brandenburg 1681 His place in the Excise Commission was terminated. 1682 Leased his little-used house in Kinsale as a Navy Office. 1685 Returned to Parliament again for the Cornish seat of Lostwithiel. 1702 Died 11 September at Kings Weston. The Almshouses were restored in 1965-1970. They were built to accommodate eight aged destitute people of the town and they continue to this day to provide a service envisaged nearly four hundred years ago!

12. 1601 Galleon Mast 13. 1914 – 1918 War Memorial 14. Wildlife Marsh 15. James Fort James Fort holds a commanding position directly across the harbour mouth from Charles Fort. Together, these forts guarded the narrow harbour entrance. Work began on the construction of James Fort in 1602. It was completed in 1607 and was captured in 1690 by Williamite forces. It has undergone much alteration in the intervening centuries. 10. Municipal Hall 11. Alms Houses See Route 3 for more information.

16. Charles Fort Perhaps the best-known historical attraction in Kinsale, Charles Fort, is on the road just beyond Summercove. It is open all year, and regular guided tours are available. Charles Fort is one of the finest surviving examples of a 17th Century star-shaped fort, and much of the construction begun in 1678 remains. The fort has two enormous bastions overlooking the estuary, and three facing inland. Within its walls were all the barracks and ancillary facilities to support the fort’s garrison. The fort continued in military use until 1922. 17. Ringcurran Church 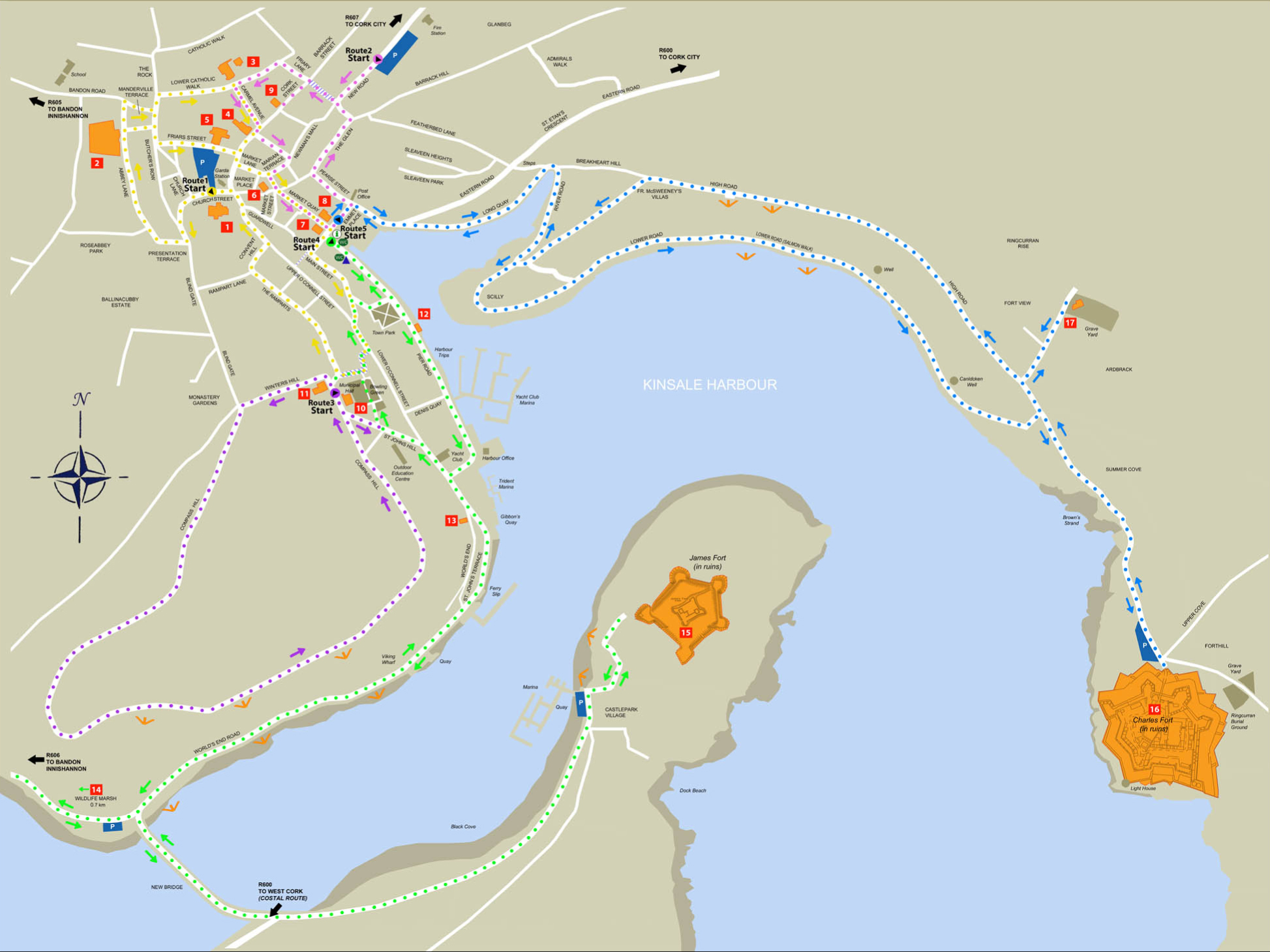