There are a number of pleasant heritage walks around Dunmanway Town. Listed below each route are numbered points of interest, which correspond with the map for each walk.

Route: Market Square – East Green – Quarry Road – Sackville Street – Main Street Distance: 1.3km 1. Market Square. The statue of Sam Maguire, Dunmanway’s local hero was erected in the Plaza in 2003. Also here grows the tree planted by Mary Robinson to commemorate the 300th centenary of the granting of a charter to Sir Richard Cox to hold fairs and markets in the town. The Market House, built in the square in the time of Sir Richard Cox was demolished in 1972 to make way for the plaza. 2. The West End Yard which was the site of a Woollen Mill in the 19th century and later the site of the Power Station which supplied public lighting to the town for the first time in January 1911. 3. East and West Greens. It was here that the products of the weavers and spinners were displayed when Dunmanway was a thriving textile centre. The display was a festival day with awards given by the Cox family to those producing the best linen; the winner receiving the title “Master of Manufacturers” and was given “a good house, rent free for the year”. Cattle and pig fairs were held here also in later years. 4. Victoria Terrace was built by Jones Builders and called after Queen Victoria. 5. Brookpark House was originally the home of the Atkins family and was used initially by the Sisters of Charity when they first came to town from 1887 to 1889. It was subsequently occupied by the De le Salle Brothers from 1891 until 1899 when they moved to Sackville Street. 6. Dunmanway Cottage was and still is the home of the Atkins family. 7. The Quarry Road Bridge also called the Idle Bridge. Just west of it can be seen traces of the millrace channel, which served the woollen mill in the West End yard. 8. Cox’s Hall, built in 1950’s in memory of the Cox Family is the local Church of Ireland Hall. 9. Sackville Street named after Sackville Hamilton Cox. 10. St. Patrick’s Boys’ School built in 1896 for the De le Salle Brothers who taught there until 1922. It continues to be used as a primary school for boys to this day. 11. The Manse has been the residence of the Methodist Clergyman since 1873. 12. St. Patrick’s Hall was built in 1882 and has served the community ever since, where everything from plays to socials took place in the main hall with billiards and snooker rooms upstairs. 13. The Convent, now closed was the home of the Daughters of Charity from 1889 until 2002. Close by, the Sisters of the Order ran the Maria Immaculata secondary school for many years. In 2002 the school was merged with the Vocational School and relocated to a new site at Bantry Road. 14. The Bridewell built in the early 1800’s served as a police barracks. Thomas Hovenden, son of the keeper of the Bridewell was born here in 1840. He became a very influential painter and teacher of fine art in America until his tragic death in 1895. 15. St Mary’s Church: The original church was built in 1704, and was replaced by the present church in 1821. It was dedicated to St. Mary possibly in honour of Lady Mary Cox, wife of Sir Richard Cox. 16. The old Cox’s Hall built in the 1800’s once stood where the SuperValu Food Market is now situated. 17. Tanyard Lane: A tannery was built here in 1798 by J. Atkins. The building was demolished in the late 1900’s to make way for the present car park. The town boasted of having two tanneries and two moulting mills at one stage. 18. Gratten’s Lane (Power House Lane) runs off market Square, and once led to a footbridge to the Power House in the West End yard.1

Route: Chapel Street – Hospital Cross – Gurrane Ban -Fanlobbus – Ballyhalwick Distance: 7.2km 1. Wesley Place: named after Rev. John Wesley the founder of Methodism. 2. Methodist Church first erected in 1790. The present church was renovated in the period 1911 – 1913 and served the Methodist community until 2007. 3. Carbery House is an old Jacobean house. It was originally built by a Rector of the parish and later came into the possession of the Shuldham family. Lady Carbery, daughter of Major General Shuldham and the Countess of Bandon was born here. At the turn of the century it was the home of Mr Francis Fitzmaurice, Solicitor. 4. The site of Galvins’ Filling Station was once the home of Duffy’s Circus, where they wintered their animals while not on tour. 5. St. Patrick’s Church: Built in 1834 on a site donated by Sir Richard Cox, 6th Baronet, in 1793. 6. Spa Road runs beside St. Patrick’s Church to the site of the spa well. 7. The Chapel Lake, just off Chapel Street: this very scenic lake is bordered by a very peaceful roadside garden. 8. Colaiste Chairbre (Vocational School), now disused, provided education for second level pupils until the opening of the Maria Immaculata Community College in 2002. 9. The Long Bridge is a six arched stone bridge over the River Bandon and was built circa the beginning of the 17th century by Sir Richard Cox, 1st Baronet with stones from the MacCarthy Castle. In the 1960’s the bridge was widened on the down stream side. 10. Bridgemount House: One of the oldest houses in the neighbourhood. O’Sullivan Bere of Dunboy Castle used it as a half-way house on his journey to and from Cork. At the turn of the century it was occupied by Dr J. J. O’Callaghan. 11. Ballyhalwick House: A Charter School was established there under the auspices of the Incorporated Society for the Promotion of Protestant Children in Ireland and continued as a school until the middle of the 19th century. It later was the home of the Norwood Family. 12. St Anthony’s Hospital stands today on the site of the Dunmanway Workhouse, which was built in 1839 – 1841. During the famine it housed over 860 inmates. During the war of independence the workhouse was occupied by the Black and Tans until it was burned in1922. A separate building adjacent to the workhouse served as a fever hospital. It later served as a general hospital until the Cottage Hospital was built on the site of the workhouse and was re-named St. Anthony’s hospital in the 1950’s. 13. The Gurrane Ban is a huge stone believed to have been thrown by a giant at his enemies from the Yew Tree Hill. 14. The Bog Line or the old Famine Road led from the workhouse to Fanlobbus Graveyard. This road was used to cart the bodies of the dead from the workhouse to Fanlobbus graveyard during the famine. 15. Fanlobbus Graveyard originated from a monastic settlement established there in the 6th century.

Route: Castle Road – Coom – High Street Distance: 6km (Alternative route via Pearl Valley and High St, Distance: 3km) 1. Castle Hotel formerly owned by the Keane Family and run as a family business. It is now Gatsby’s Night Club. 2. Keane’s Mill was once a flourishing corn mill. 3. Site of MacCarthy Castle on the bank of the Sally River. The Castle was dismantled around the 1830’s and the stones were used to build the Long Bridge when Sir Richard Cox, 1st Baronet, started to develop Dunmanway, and were also used to build the present Cotter and Keane’s mill. 4. Pearl Valley – Built circa 1850, the site of a bleach mill and dwelling house owned by the Cotter Family. This mill was also a scutching mill, until it was burned circa 1930. 5. Derrynasafagh: Site of the first water supply to Dunmanway town built by the West Cork Board of Health. and served the town until the 1950’s when the present water supply scheme was built with the water being sourced from Coolkelure Lake. 6. Coom: Affording panoramic views of the town and its hinterland. 7. High Street: St. Mary’s Primary School built for the Sisters of Charity in 1965.

Route: Castle Road – Kilbarry – West Green Distance: 3.4km 1. Woodbrook House. This was one of the Cox family’s residences, built in 1750. French prisoners from the Spanish Armada were interned here after their capture in Bantry Bay in 1798. 2. Dromleena House known in the past as “The Millionaire’s” was once owned by the Shuldham Family. 3. St. Finbarr’s Well (Tobernadihy): reputed to be founded by St. Finbarr where people “prayed the Rounds” on St. Finbarr’s Day, 25th September. 4. Kilbarry Graveyard. A monastic settlement was established here in the 7th century and dedicated to St. Finbarr. Many famous local people are buried here, most notably, members of the MacCarthy Clan. 5. Finbarr House was built in 1938 by Frank O’Leary, who owned a bakery in Dunmanway. 6. Dunmanway Creamery was built in 1938 by William John Kingston, Kilbarry as a branch of Drinagh Co-op. The farmers from the surrounding area supplied milk to it. The milk was separated and cream taken to Drinagh to be made into butter. The present-day Store was added in 1950. 7. The Teagasc Office is the main office of the region and has a client-base of approximately 400 farmers. It is the educational centre for farm courses. 8. The Mill House, now demolished, was a stone house and was used at one stage as a secondary school. 9. Cotter and Keane’s Mill: The original woollen mill was a seven storey high building built by Gould and MacNamara with stones from the nearby MacCarthy Castle. It was later owned by the McLeans. At certain times of the year it changed to the production of linen from flax. Today it produces animal food. 10. The Lisheen Field originally stretched as far as the flood plain of the Sally River. Lisheen means small lios or fort. There is no evidence of this lios or fort in the area at the present time.

Route: Bantry Road – Mullough – Park Road Distance: 4.3km 1. Bantry Road known previously as the Coach Road because it was the road travelled by the coaches from Cork to Bantry. 2. The Broadway Cinema opened in May 1930 with the film “Bringing Up Father”, and closed in May 2005 having entertained the public for 75 years. 3. The Model School built in 1849 is a light ornamental building in the Tudor Style. In its early days it was a preparatory training school for prospective Primary Teachers as well as a Primary School. It also housed an agricultural school with an adjoining model farm. Sam Maguire received part of his early education here. 4. The Swimming Pool built in 1979 was the first public indoor swimming pool in West Cork. 5. The Maria Immaculata Community College was opened in December 2002 with 551students and a staff of 50 teachers. It now caters for up to 600 pupils with over 70 staff. 6. The nearby 18 Hole Pitch and Putt Course is open to the public all the year round. 7. Bess’s Cross. It is said to be called after a highway woman who is reputed to have conducted her robberies in the area. 8. Manor House: The original house was built for Sir Richard Cox, 1st Baronet, and Lord Chancellor of Ireland at the end of the 17th century. The present Manor House was built by the 2nd Baronet, Richard Cox in 1819. 9. Mohana Lake: A course fishing lake set in the picturesque tranquil surroundings of the townland of Mohonagh. 10. Mullough or Mullach in Irish which means “top”. From here can be seen a panoramic view of Dunmanway town. 11. Sam Maguire Park, home of the Doheny G.A.A. Club and the Sam Maguire Under-age Club. 12. The site of the disused Dunmanway Railway Station, once part of the Great Southern Railway. 13. The site of an old Brewery, hence the name of the Brewery River and the Brewery Lane, now known as Park Road. 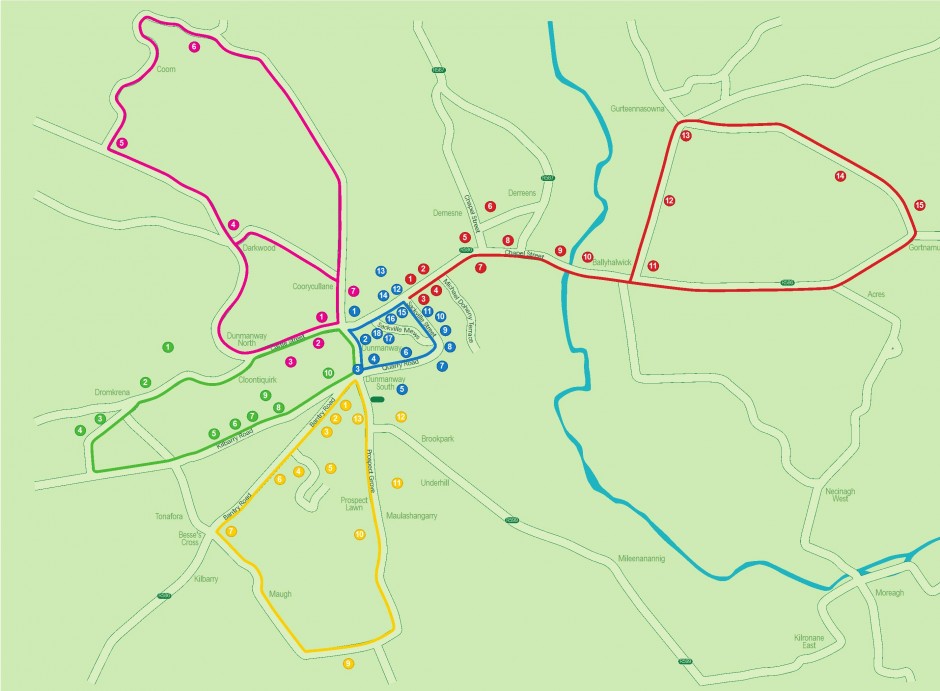