From Clonakilty town to…

Info: 4 miles, flat walk, small hill optional Proceeding down Wolfe Tone Street away from the centre of town, you take the ring road by the roundabout. This takes you along the coastal route to Ring village, and the first harbour with fishing vessels tied up. Hug the coast, and pass the ruins of Arundel grain store. You may see swans in the shallows. Then you have the choice of pursuing the waters edge or taking a small road uphill on your left, with spectacular views of the bay. Continue on past the second harbour to the third and final harbour of Ring. Return via the waters edge route.

Info: 2-3 miles, hill walk for first part Ascend McCurtain Hill, the Garda Station is on your right, then the former Clonakilty Railway Station. Carry on straight until you come to a fork in the road marked by a small Celtic cross. Go right, and Temple-bryan stone circle is in a field immediately on your left. The stones can be viewed from the roadside. If you carry on, you will come to the village of Shannon-vale with its mill and fast-flowing river. At the other side of the village, if you walk a further half a mile, a memorial stone marks the site of the Battle of the Big Cross (1798) where Tadgh an Asna and his followers were killed.

Info: 4 miles, mostly flat walk Start out from the Model Village on Inchydoney Road and follow the path on the water’s edge around the causeway. A notice board on the way tells you about the various birds and wildlife to be seen around the Bay. Carry on until you come to a fork in the road and take the road to the right, signposted Inchydoney. A shorter walk is to choose the left turning — a pleasant cul-de-sac to walk along by the water.

The recreation area of Castlefreke is a collection of woodlands close to Rathbarry village.  The main woodland car park is adjacent to Castlefreke castle.  Rathbarry castle, Rathbarry church and graveyard are nearby. Rathbarry castle was built in the 15th century by Randal Ōg Barry.  It passed on to Arthur Freke in1617 and became the family seat of the Evans Freke or Lord Carbery family. In 1780 Sir John Evans Freke built a new castle on a new site, thus the 2 castles are positioned so close to each other.

The woodlands, comprising of an area of 113.7 hectares, came into state ownership after the 2nd world war.  They were planted with a mixture of conifers and broadleaves in the early 50’s.  Species planted were Sitka and Norway spruce, Maritime pine, sycamore, beech and some oak. The pines and spruces are gradually being phased out of the area and are being replaced with oak, ash, Douglas fir and larches. Part of the lands planted in the 50’s was an area of 10 ha. adjacent to the sand dunes at the Long strand. It is believed that these dunes were formed as a result of a tsunami which occurred in 1743. This area has now been clear felled and will not be replanted, it is being preserved for biodiversity. The location of the woods so close to the beach provides for a perfect interchange of recreational activity. There are four waymarked trails and 7km of forest roads to be explored.  This is the perfect location for a family walk, for a budding historian or for an ecologist. Waymarked trails include; WALK SECTIONS

Start Point: Forest Entrance 1.3km / 40mins Difficulty: Moderate Trail Way marking: Blue This walk starts at the forest entrance that is located 850m west of the main forest car park. The trail is located in a woodland of Oak, Ash, Maritime Pine, Sitka spruce & Sycamore. The blue markers will guide the walker up past Lord Carbery’s Cross which was erected at the summit of the hill of Croghna in 1902 by Lady Carbery in memory of the husband the 9th Baron of Carbery. This cross is 30 feet high & is the highest memorial cross in Ireland. From here, there are magnificent views of the ocean and the surrounding countryside. The trail continues down the hill from the cross towards the beach named the Long Strand. Again, there are breathtaking ocean views, with the Galley Head Light House being visible on clear days to the South East. There is an option to take a 200m shortcut down the hill to Long Strand or continue on the loop back to the forest entrance and start of the trail.

Start Point: Forest Entrance 650m / 25mins Difficulty: Easy Trail Way marking: Orange This trail starts by entering through the old estate walls and brings you along by a gurgling stream on one side and a young Sitka spruce stand on the other. The trail will lead you out into an open area that runs adjacent to the more mature forest estate and along the road. There are young oak trees, ash and Spanish chestnut to be observed along the way. This is a nice easy walk that can be enjoyed by people of all ages. There are a number of benches along the way for you to sit and take in the surroundings.

Start Point: The Lodge 1km / 30mins Difficulty: Easy This is a linear walk that begins at the forest entrance opposite the lodge & runs through the forest property down to Kilkeran Lake & Castlefreke sand dunes. The forest section comprises of uneven aged broadleaves which form an attractive canopy. There are intermittent mature oaks at crown level with a succession of under storeys of oak, ash, alder & sycamore. The stream that runs adjacent to the trail bounds a large area of marsh that is a haven for ecological diversity. The walk is noted for its wild flower displays from early Spring to late Autumn. Continue down the trail to Kilkeran Lake & Castlefreke dunes. It is believed that these dunes were formed as a result of a tsunami which occurred in 1743. The habitats to be found here are of prime conservation value & are protected by law at an Irish & European level. The lake is a natural sedimentary lagoon linked to the sea by a narrow channel & hosts a variety of aquatic vegetation. The water tends to be brackish, in that it receives freshwater from the nearby stream & saltwater from the channel that links it to the sea. It is thought that some saltwater gets into the lake through seepage also. The dunes are important in that they contain three dune habitat types including the fixed dune, which is a priority habitat. The sand dune flora on these dunes is very rich for this area of West Cork.

Start Point: Sprigging School 450m / 15mins Difficulty: Easy Trail Way marking: Green This looped nature walk begins at the Sprigging School on the outskirts of Rathbarry village. The orange markers will guide you along the trail parallel to the river in what is essentially a small wet woodland. This is a haven for biodiversity with various tree species present including; oak, ash, rowan, wych elm & birch. There are other layers of vegetation here, including decaying matter that provide a rich habitat for the local wildlife, providing them with food & shelter. During the summer months there are beautiful displays of wild flowers. This is the ideal location to spend some time invigorating your senses with the various sights, sounds & smells of nature. 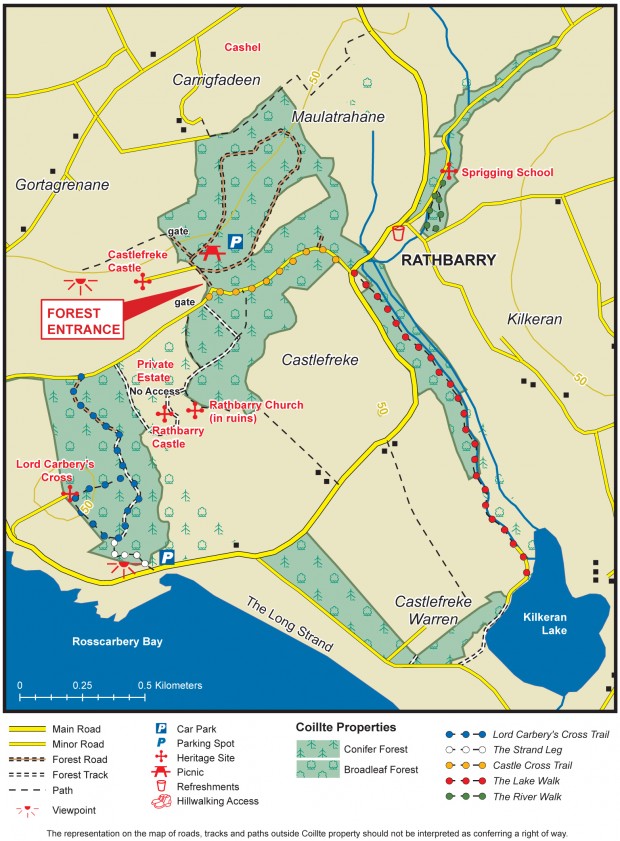 Walk 1 (short walk) — Start at the centre of the village, with the monument to one of the area’s most famous sons, Dan O’Leary, a champion in the world of walkers. Go north-east in the Clonakilty direction, passing the information board, and stop at Rathbarry Church. Go to the back of the church and decend the 60, or is it 70 steps? Now head west back to the centre of the village, past the Well, the Sprigging School and the museum at the back of Castlefreke post office. Walk 2 (longer walk) — Leave the village in a south-easterly direction passing the pub with its water well and ducks in the garden, the road rises gradually with fine views. When you get to the top of the hill, take the first right, down a narrow road, at the end of this road turn right again. At the end of this road, turn right again and go as far as the bridge. Now you have two options: 1. Turn left and walk onto the Long Strand and explore the sand dunes or 2. Stay on the road. Proceed north-west, keeping the waters of the Atlantic on your left. You pass two stone built lodges — from the second of these you can see Castlefreke and Rathbarry Castle. Keep to your left, past the café at the end of Long Strand, and proceed up the hill until you get to a panoramic view of the Atlantic ocean and the Galley Head lighthouse. Now decend the hill and facing you will be Owenahincha beach. Turn right at the bottom of the hill, you are now on ‘the Avenue’. Pass the gate lodge and there’s a fine view of Castlefreke to your left. On the right, just above the trees, are Rathbarry Castle and Church. There are many woodland walks off the Avenue, perhaps for another day. Continuing to the end of the Avenue, turn left back into the village.
« Coppeen Waymarked Walks » Carrigfadda Hill Walk