Carrigfadda, or An Charraig Fhada in Irish, can be translated to mean the Long Rock.  This refers to the forest property that sits on a hill of some 313 metres high, that affords truly magnificent coastal and indeed countryside views on clear days.  It is one of the most imposing areas of high ground along that particular stretch of West Cork coastline.  It is immediately recognisable and widely used as a reference point by people travelling on land and on sea. For generations the Hill at Carrigfadda, which is composed of old red sandstone, has played its role in the history, mythology and culture of the area.  It is a local tradition to climb the hill during the Christmas Season, to the 7 metre high Marian cross which stands proud at the summit. The ‘Carrigfadda Hill Walk’, is essentially a 3.8 km return linear walk, incorporating a 1.5km looped section on Carrigfadda Hill. The start point is at St. Peter’s church, Carrigfadda.  There are red way markers leading from the church car park, along the road that will guide you to the base of the hill.  From here there is a strenuous yet worthwhile climb up many steps and on into the woodland to the Cross at the summit, which was mounted in commemoration of the Marian Year of 1950/1951.  The walker will be rewarded with fantastic panoramic views of the coastline to the south and the rolling countryside of West Cork, in all other directions.  Also of interest on the ridge of the hill is a trigonometric station, which was erected in the mid 1960’s.  The walk continues back in under the woodland canopy where the trail rejoins the original ascent at the top of the steps.  The walker will then retrace their steps back to the car park. 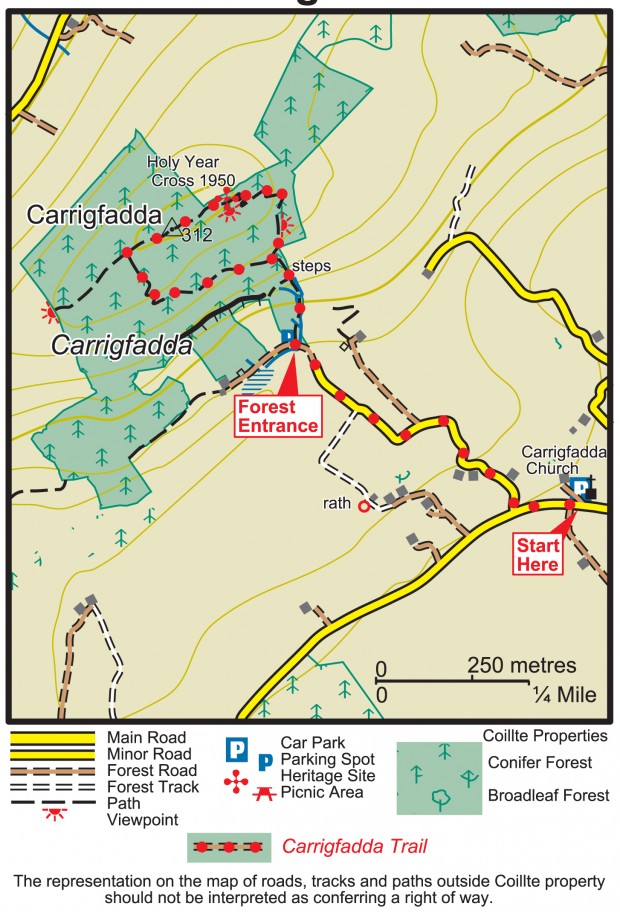