Start and Finish: Junction between R572 and third class road 300m east of Rossmackowen Church, between Adrigole and Castletownbere.
Time: 7-8 hours
Distance: 13km
Difficulty: Hard. Only suitable for experienced hillwalkers or groups accompanied by experienced hillwalker. Do not attempt in mist.

The following article was written by Tony Doherty. Used with kind permission from Go Magazine, the Irish Times Travel Supplement.

As you head southwest along the R572 between Glengarriff and Castletownbere, the rocky mass of Hungry Hill looms in front of you. On a sunny day, when the cooms are in shadow, it looks like some prehistoric monster waiting to devour you. I once asked a local why it was called Hungry Hill. He leered and said. “Beacause it’s hungry for bodies” I haven’t been tempted to make further enquiries. The southwest side of the mountain offers a great opportunity to practise route-finding on steep ground among a confusion of outcrops, with a bit of easy scrambling thrown in for good measure. This route should not be attempted in mist. Navigation is extremely difficult as you can’t follow a direct line, and its easy to drift off course. The horse shoe is best tackled on a clear summer’s day when there’s plenty of daylight and the rock is warm and dry enough to bask on.

Start from the junction between the R572 and a third class road 300m east of Rossmackowen church. At the top of the road a track brings you into Coomnagapple Glen. It runs past Park Lough and skirts around the truncated end of the southwest spur. Start your ascent at the dip in the track after the second Beara Way marker. Head straight uphill for 50m or so, then start walking over to your right towards the spine of the ridge. Keep left of all the bigger outcropson the way up and you won’t have a problem. Half-way up the spur the ground steepens significantly and you’ll to the foot of a high crag. At the foot pick up a narrow track that leads uphill around it. Keep working uphill on the rock bands and terraces until you are stymied again. Go left until you can continue your course.

The top of the ridge leads to the cairn at 667m. Across the bog to the north sits the summitcairn at 685m. From here here there is an astonishing vista, taking in the Cork and Kerry mountains, Cape Clear, Fastnet Rock, the Skelligs and the great bays of the southwest and their attendant peninsulas.

The descent requires care and concentration. You must head north along the county boundary to the 650m contour. Then cut down left to rejoin the boundary at the 550 contour. It is a shoulder rather than a narrow ridge, so try to keep to the centre line. As the slope gets steeper small heaps of stone mark a path through the outcrops. If you spot them it saves you the hassle of finding your own route dowbn to the col. As you head upwards again towards spot height 442m you’ll come to a small lake thatis not marked on the map and lead you to doubt your position. I assume that the presence of this lake, and two smaller ones we came across further up, is due to the heavy rain of the past few summers and low evaporation rates. The rock in this area is impermeable shale, so the water doesn’t filter down.

Skirt around the north side of the spot height and head west to pass between Glas Loughs and the small lake in the col. Keep heading west and you’ll come to that most wondrous of things a dry bog road that leads all the way down to the road. While the circuit is hugely enjoyable, it would not be fun to descend a further 400m on that terrain. 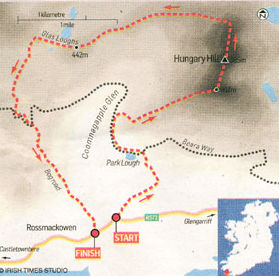