Timoleague is a picturesque village situated just 30 miles from Cork City on the Kinsale to Clonakilty coast road (the R600). Perched at the edge of a long sea inlet this friendly tourist village is dominated by the ruins of a 13th century abbey.

The village of Timoleague itself, with its many brightly coloured dwellings and businesses, is home to some fine restaurants and pubs. It is also ideally situated to take advantage of some of the many local outdoor activities including walking, sailing, surfing, golf and fishing to name but a few.

In August each year the village hosts the Timoleague festival. This ten day harvest festival sees the streets thronged with locals and tourists alike trying to catch a glimpse of the many street activities which are organised for the event. Live street music, pig racing and the fancy dress competitions are among the most popular of these activities. A large marquee is also erected on the village green during the festival with many big name acts performing.

The local GAA club, Argideen Rangers, have an exceptional record for a village of this size. Achievements include the 2005 Cork Intermediate Hurling Championship as well as a number of Junior Football & Hurling County Championships over the past fifteen years. The club has created some great sportsmen including Mark Foley, the hero of the 1990 All-Ireland Hurling championship.

Timoleague Abbey is well worth seeing as there are substantial remains of this 13th Century Franciscan Abbey still standing. The abbey was founded by the Franciscan order in 1240 A.D., on the site of a 6th century monastic settlement founded by Saint Molaga. The name Timoleague comes from the Irish for House of Molaga (Tigh Molaga). St. Molaga was reputed to have brought beekeeping/honey to Ireland. Honey production is still evident in the area.

The abbey was extended by Donal Glas McCarthy in 1312, and by Irish and Norman patrons in the 16th century. The monks were dispersed by the Reformation, but returned in 1604. In 1612 the abbey was sacked by English soldiers who also smashed all of the stained glass windows, but much of the significant architecture remains. The friars remained in the abbey until 1629.

Timoleague’s two churches are quite interesting. The Church of the Ascension has an antique mosaic interior carried out and paid for mainly by the then Maharajah of Gwalior of India about 1920 in memory of his doctor, Dr Crofts, who came from Timoleague. The church itself dates from 1811. The Roman Catholic Church contains one of the last stained glass windows from the studio of the Irish artist Harry Clarke.

On the road to Courtmacsherry is the ruins of a Cistercian Abbey – Abbeymahon Abbey. The abbey was founded in 1172 by Dermot MacCormac MacCarthy, King of Desmond. The site was originally at Aghamanister and was colonized with a group of monks from Baltinglass. Almost a century lapsed before the monks decided to move to a new site. The monks moved to Abbeymahon in 1278 when Diarmuit MacCarthaig, son of Domnall Cairbreach, was buried in the new monastery.

Considering the tranquillity of Timoleague and Courtmacsherry, with their old ruins and quiet waters, it is hard to imagine that this was once a thriving shipping area. Timoleague had an important trade with Spain, and schooners anchored near the Abbey. The great earthquake in Lisbon, Portugal, of 1755 put an end to the deep waters around the settlement of Tig Molaga, silting up the bay with tons of sand.

Timoleague Railway Station once connected the village to the West Cork Railway, by a branch onto the Clonakilty railway line. It was opened in 1890. The railway later extended to Courtmacsherry in 1891 and its pier in 1892. It had three locomotives, Slaney, St. Molaga and Argadeen. Regular passenger traffic ceased in 1947 with post-war fuel shortages, and the line was closed completely by CIÉ in 1961.

There are a number of very pleasant short strolls around Timoleague and its environs. The beautiful Bay Walk – from Timoleague to Courtmacsherry is 3 miles on flat pathways so is suitable for young and old. Alternatively you can walk from Timoleague to Burren Point, a flat 5 miles.

The Seven Heads Walk extends from Timoleague Village through Courtmacsherry, around the rugged cliffs and shore line to Dunworley and on through Barryscove and Ardgehane to Aghafore and Barry’s Hall and then back to Timoleague. The walk embraces a very interesting and varied territory in the course of its entire distance of approx. 42.5km around the peninsula. As there are several routes and circular walks one can choose a route to suit the time and energy available.

The walkway leads through a variety of different types of scenery, rocky coastlines with magnificent marine life, sandy beaches, extensive rich farm land, picturesque villages and farm yards, prolific bird life with some rare birds such as the choughs and the little egret, old woodland and hedge rows with fuchsia in abundance. See the Walking section.

There are several beaches in the area from which to choose; Courtmacsherry Beach, Coolmain Strand, Dunworley Bay and Ballinglanna. Drive via Butlerstown to Coolum Cliffs, which are the second highest cliffs in Ireland. 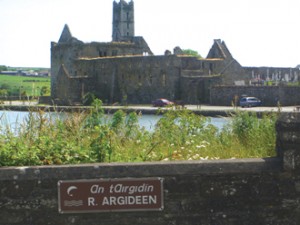 The Argideen River is primarily regarded as a sea trout fishery. The river is jointly managed by Argideen Anglers; Association and the southwestern Regional Fisheries Board and there are two private stretches that are not let. The Argideen Anglers control the fishing on the best 2-3 miles of the river, from Timoleague upriver. Fishing is for Sea Trout, mainly nighttime fly fishing. 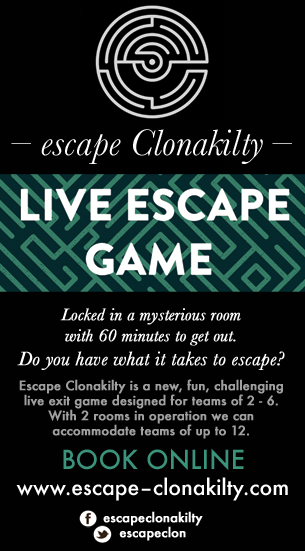