Famed for its natural beauty, Glengarriff is situated on world-renowned Bantry Bay where the mountains meet the sea. Glengarriff connects the towns of Bantry and Kenmare and has acquired a fine reputation for the great variety of shops, galleries, accommodation, restaurants, pubs and services.

Glengarriff has been famous as a holiday destination since the 1700s and boomed in the Victorian times as an important stop along the Prince-of-Wales-Route. WB Yeats was a regular visitor in the 1920s. Today the village attracts visitors from all over the world. The population of the Glengarriff is just 800 and it expands significantly in size during the summer months. A natural meeting place, with its unrivalled beauty, peace and tranquillity, Glengarriff invites you to sit back, relax and take in the very special ambience of the place.

You will have great choice when deciding where to eat locally. The hotels, restaurants, bars and coffee shops in Glengarriff offer a taste for every palate. Most pubs and hotels also hold regular music events.

For kids, Glengarriff has an adventure playground situated in the Blue Pool Park or older children might enjoy kayaking in the bay. And for the golf enthusiast, Glengarriff’s 9-hole golf course offers spectacular views of the harbour.

Glengarriff’s most famous face is Maureen O’Hara, Hollywood legend, who made Glengarriff her home for so many years and is very involved in the local community. Maureen starred in over 60 films during her long career.

DIRECTIONS: Located on the N71, 18km from Bantry.

Located in the shelter of Glengarriff Harbour in Bantry Bay and warmed by the waters of the Gulf Stream, this island and its unique gardens enjoys a climate that is almost sub-tropical, making it possible for beautiful ornamental plants from many parts of the world to flourish. This gardening gem, set in the clear, clean waters of the bay is known to horticulturists all over the world and was featured recently in BBC Television’s ‘The Flying Gardener’ series.

The 15 hectare island was bought by Annan Bryce in 1910. He intended to build a mansion as well as lay out extensive gardens on the island, which, at that time was as bare and exposed as the mountains of the nearby mainland are now. Rocks had to be blasted and shelter-belts of conifers planted all round the island in preparation for work on the grand design to begin.

In fact, the planned mansion was never built and the Bryce family used an extended cottage as their home until the island was bequeathed to the Irish people in 1953. Many distinguished visitors were entertained at Garinish including George Bernard Shaw, who stayed on the island in 1923 while working on his play, ‘Saint Joan’.

The extensive gardens were built however, and remain as a lasting tribute to the vision of Annan Bryce and to the skills of his architect, Harold Peto, who specialised in the design of Italian style gardens. Widely known for his work throughout Britain and southern France, the gardens of Garinish are acknowledged to be Peto’s masterpiece.

The island’s Martello Tower, built in 1804-5, and one of many such towers constructed around the coast as a precaution against possible French invasion.

Along the magnificent coast of Beara there are centres for sailing, whale watching, swimming, angling, scuba diving, surfing and other water sports, with horse riding and lake/river fishing very popular inland. Other local activities like kid’s camps, island trips, and garden walks all make up the infinite variety that this region has to offer. 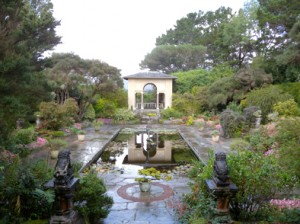 Garinish is renowned for its richness of plant form and colour, changing continuously with the seasons. The vivid colours of Rhododendrons and Azaleas reach their peak during May and June, whilst the hundreds of cultivars of climbing plants, herbaceous perennials and choice shrubs dominate the midsummer period from June to August. Autumn colour, particularly on the magnificent heather bank, is rich during the usually mild early autumn months of September and October.

The centrepiece of the design is the Italian garden with the perfectly proportioned buildings of the Casita and the Temple showing the warm tones of mellow Bath stone, columns of gloriously red Rosso Antico and the veined beauty of slabs of marble from Carrara and Connemara.

As a visitor, you may also wander the wilder planting of less formal areas, enjoy the heavily shaded woodland environment of The Jungle, stroll beneath the fine brick and stone walls of the Walled Garden with its nurseries and climbing plants, or climb the wide steps at the end of an avenue of Italian cypresses that leads to the Grecian Temple with its views over the sea to the Caha Mountains.

If you follow the path from Happy Valley, a flight of blue shale steps leads you up to the Martello Tower.

Even for those who are not particularly interested in gardens, Garinish is an attractive place to visit. There are many attractive views of the scenery of the surrounding district from the island. The island and its surrounding waters are quite rich in wildlife, the seals which frequent the rocks on the southern shore being of particular interest to many visitors. See Glengarriff’s History section to learn more about Garinish.

When it’s time to rest, you can also enjoy the welcome of the island’s café, taking your refreshment while looking out over the sea to Glengarriff with its backdrop of mountains.

Garinish, which means ‘the near island’ is also known as Illnacullin, ‘the island of holly’, which may well be its original name.

The island is open to visitors each day from 1st March to 31st October.  During the winter months, from November to February, it is closed to visitors except by special arrangement. The island is reached from Glengarriff by privately operated boats. A charge for admission is made by the Office of Public Works on arrival at the island. This charge is quite separate from the fares collected by boat owners.

In 1990 the Beara Way Walking Route was set up. It is a route of 120 miles from Glengarriff to Dursey, Dursey to Kenmare and back to Glengarriff. The route includes Bere Island and passes through towns and villages on the Beara Peninsula. See The Beara Way under the Walking section.

There are numerous shorter hikes in this area. See Great Glengarriff Horseshoe and Glengarriff Nature Reserve under the Walking section.

Fish the rich Atlantic waters surrounding the North and South of the Beara Peninsula, which influenced by the Gulf Stream, brings warmer water and exotic species of marine life to our shores.

Whether you want to take a pleasure boat cruise to Garinish Island, or enjoy kayaking and sailing, there is a wide selection of water-based activities in Glengarriff for you to enjoy. 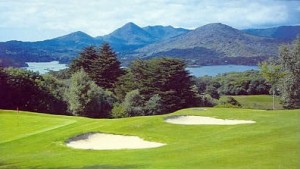 Glengarriff’s nine holes are in one of the loveliest settings in Ireland, with scenic views abounding – the one from the fifth tee is exceptionally beautiful.

Allihies: The beach at Ballydonegan on the way to Allihes village from Castletownbere was constructed using crushed stone taken from the disused Copper mines in the surrounding area. The beach also boasts an adjacent camping site with toilet facilities and is a short walk from the picturesque village.

Ardgroom: Droumard Strand is located 1.5 miles from Ardgroom Village on the Kenmare Road. It is one of the safest and cleanest in the Beara Peninsula.

Bere Island: A small sheltered strand is located on the South side of Bere Island overlooking Bantry Bay. It is signposted from the village Rerrin. It has sand a gravel beach and is safe for bathing for young and old.

Castletownbere: Tralahan, approximately half a mile (1 km) from the town on the main Allihes road, has been developed in the last number of years. Toilet facilities are now available. Take the first left turn, after the football pitch on your way out of the town on the Allihes road.

Eyeries: The Strand at Eyeries is signposted from the village. It has a sand and gravel beach and is safe for bathing for young and old. There are swimming lessons held during the summer.

Garnish beach is to be found at the tip of the peninsula en-route to Dursey Island. Comprising of fine white sand this beautiful beach also has toilet facilities. It is near Garnish Post Office and is well worth a visit on a sunny day in Beara.

Travara / Travaud: Both swimming areas are to be found on the northern side of the peninsula, between Eyeries and Urhan. They are popular bathing spots and host annual swimming lessons every year.